It's Spring and Love is in the air

It's Spring! The flowers are blooming, the sun is shining and love is in the air. You say Love in Preschool? Yes, you read it right! It's common and there's not been a year I've taught that I didn't have a least one couple in my class. What's uncommon this year is that it's been the same boy but three different girls! His latest "girlfriend" plays with him in Centers, holds his hand on the playground, and positions herself in front or behind him in the line. They make it a habit to sit next to each other and strategically plan to create Art projects for each other. I must say I do discourage kissing as I tell them they may spread "germs" but they're welcome to hug, and they do hug every chance they get. As soon as one arrives in the morning, they're looking for the other half. When the other half arrives they run and hug like they're long lost relatives. During our Martin Luther King lesson I caught an image of them sitting on her cot reading a book together. 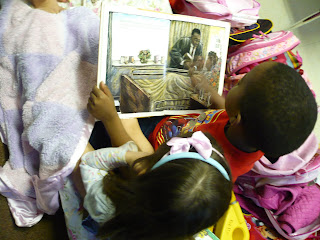 The parents thinks it's hilarious. The teachers think they're too much! I think they're both the sweetest kids attempting to imitate the relationship they see between their parents.

Posted by Centers and Circle Time at 9:45 AM

Email ThisBlogThis!Share to TwitterShare to FacebookShare to Pinterest
Labels: All in a day's work, Preschool

We love our supporters